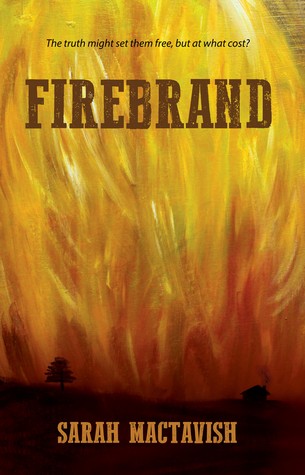 Way back in…March, I think…I went to a local author event, mainly because Rachel Caine was going to be there, and I love her writing. I’d heard her speak before, and was pleased to have another opportunity. There was another author there, Sarah MacTavish, and I really enjoyed her talk as well. So, I ended up buying her debut novel, Firebrand. And it’s been sitting in that particular TBR pile until last week. Yes, I stockpile books…and then don’t have a chance to read them for months. I have a problem, okay?

When I did pick it up, I finished reading it in less than 24 hours. It was that good. It’s set right before the Civil War, and its about two young abolitionists and the struggles they face. I like historical fiction, but I thought this YA historical was extremely well-written, and I found myself rooting for the characters. (Also, I’m from Texas, not too far from where part of the book is set, and I had no idea about some of the things in the novel.) This book deals with difficult events and topics, but it’s history:  if we don’t learn from it, we’re doomed to repeat it.

Saoirse Callahan and her family are struggling to survive on their small Texas farm that’s a far cry from their home in Ireland. Tempers are short, and after the death of one of her brothers, the whole family seems on the verge of collapsing. Then a series of fires sweep the region, and rumors of a slave uprising spread, leaving vigilante justice in their wake. Saoirse is desperate to find out what really happened, but her questions land her family in even deeper trouble.

Westleigh Kavanagh is safely an abolitionist in Pennsylvania, until he realizes his father’s new boarder is a runaway slave. Westleigh is determined to keep the man’s secret, even from his father, who, as sheriff, is bound to uphold the law, no matter what his personal beliefs are. Then Westleigh finds an old journal, and uncovers secrets his father has long kept hidden from him, secrets that lead him to the Callahans in  Texas.

One thought on “Book Review: Firebrand, by Sarah MacTavish”

“Kingdom of Sea and Stone” by @mararutherfordwrites is the wonderful sequel to A Crown of Coral and Pearl. The adventure continues!
“These Vengeful Hearts” by @kl_writer is the story of Ember, determined to infiltrate the secret society at her school—and take them down before they hurt any more people.
“Fable,” by @adrienneyoungbooks is the tale of Fable’s adventures as she struggles to escape her dangerous life and find the father that abandoned her on that island years ago.
“Where Dreams Descend” by @janella.angeles is a riveting tale of darkness and magic where things in the mirror can be more than they appear.
“A Life Once Dreamed” by @achel_fordham is a wonderful historical fiction about leaving the past behind and learning to embrace the future.
“Cry of Metal & Bone” by @leslyepenelope is the third installment of the riveting Earthsinger Chronicles.